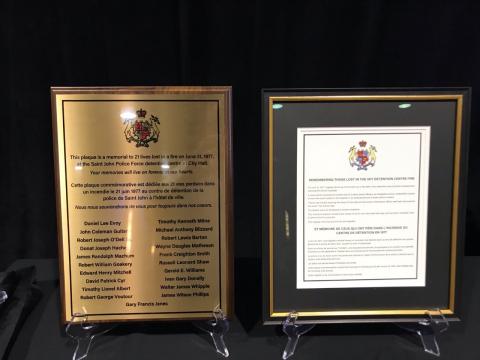 A memorial, on the outside wall of the council chamber at Saint John City Hall, has been erected to remember those lives lost on the evening of June-21-1977. A fire broke out in the former Saint John Police Force detention centre, once housed in City Hall, and claimed 21 lives.

The memorial plaque contains the names of all 21 men and is placed in proximity, to the exact location where the detention centre was housed. Mary MacDonald is a member of a social media group, organized to remember those lives lost and begin the discussion of how to honor their memories.

“I did not lose family in the fire, but my neighbors lost their son. (Timothy Kenneth Milne). I spent a lot of time with his parents growing up and was witness to their pain and suffering so I hope, in some way, this memorial can bring some solace to all of the families that lost a loved one,” says MacDonald.

MacDonald presented the proposal for a memorial plaque to the Saint John Board of Police Commissioners which was unanimously approved. “The tragedy of that fateful night on June-21-1977 is never forgotten,” says Commission Chair Ed Keyes. “Thank you to Mary MacDonald for her efforts and all the families for allowing us to honor their loved ones,” adds Chair Keyes.

Flags outside of City Hall and 1 Peel Plaza will be lowered to half-staff throughout today and every June-21 to honor those lost in the detention centre fire.