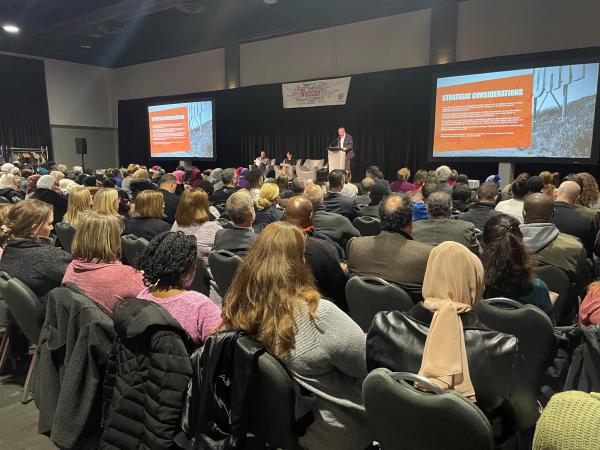 The City of Saint John, in partnership with the Saint John Local Immigration Partnership (SJLIP), has received Council approval for a new immigration strategy that aims to attract, welcome and retain more newcomers to the community.

The Succeed and Stay Immigration Strategy aims to attract 12,000 newcomers to the City over the next 10 years by promoting the Saint John region as the destination of choice for newcomers and their families in New Brunswick.

“With this strategy, the City and community partners are focused on making Saint John and the broader region an even more welcoming, inclusive, and opportunity-filled community for newcomers arriving to our province,” says David Dobbelsteyn, co-chair of SJLIP and acting director of Growth and Community Services for the City. “The goals outlined in the plan are key to growing our population and economy and will help us build a more vibrant community for everyone to enjoy.”

The eight foundational priorities identified for the next 10 years include:

While the strategy was presented by the City of Saint John, the organizations and groups that make up the SJLIP will be responsible for implementing its actions: government, local settlement agencies, economic development partners, health-care partners, business partners, school boards, post-secondary institutions, and newcomers. A cornerstone organization includes Envision Saint John, given its role in leading regional attraction and growth.

“The Saint John Immigration Strategy supports the ongoing commitment by the region to grow its population over the next 10 years by 25,000 and the recognition that immigration will be a key driver of this growth. This is an exciting step forward for the City and our region,” says Paulette Hicks, CEO of Envision Saint John: The Regional Growth Agency. “A key to the success is working with municipalities to ensure we are growth ready.”

The new strategy builds on the City’s Population Growth Framework and a three-year study funded by ACOA, the Province of New Brunswick and the City of Saint John that includes input from over 900 local immigrants and dozens of community partners on the opportunities for as well as needs and wants of newcomers.

To read the strategy, visit: www.saintjohn.ca/growthplans