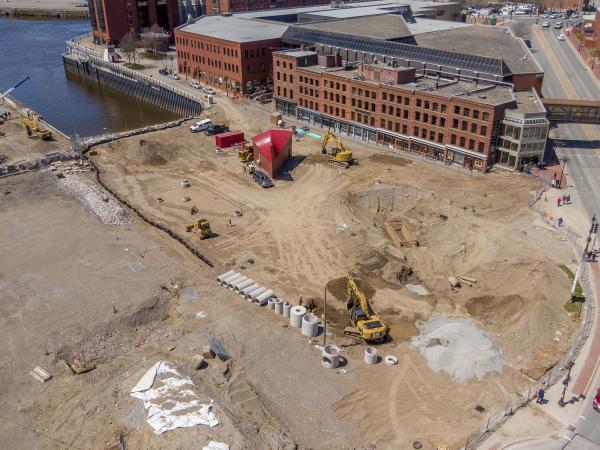 The Fundy Quay development project is marking another major milestone with construction work now set to begin on the site following several months of preparation along the Saint John waterfront.

Construction equipment and crews will be arriving on site throughout the week of September 19 and the public will start to see construction activity increasing over the coming weeks and months. The start of construction represents an exciting next step in the redesign of the public space at Market Slip and the extension of Harbour Passage.

“This transformational project is taking another step towards becoming a reality,” says Brent McGovern, the City’s Commissioner of Utilities and Infrastructure. “The start of construction work highlights the positive momentum of the project, which, when completed, will revitalize a significant portion of the Saint John waterfront, further enhancing the City as a vibrant and exciting destination for both residents and visitors.”

As part of the initial work plan, the temporary restaurant patios at Market Square are scheduled to be removed by mid-October to make way for the construction of new permanent multi-season patios, which will open in time for next summer’s patio season. The restaurants will remain open for business during the construction period, and can easily be accessed through the St. Patrick Street entrance, the entrance across from the Hilton Hotel and through the pedway connections in Brunswick Square.

The Fundy Quay development project will include a mix of retail, residential, and commercial spaces, several interactive and accessible public spaces, and an extension of Harbour Passage.